Buy to Let Investing is Dead: Here’s Why

When it comes to buy-to-let investing, the game has changed. We’re not even just talking about the potential impact of a global recession and rising interest rates on future capital gains on property.

We’re talking about the hard facts of one of life's only certainties. Taxes.

Since 2016, the government has been phasing in significant changes to the tax treatment on buy-to-let properties. This was fully implemented in 2020 and honestly, it seems to have slipped under the radar. That’s probably not all that surprising, given that we all had another pretty major event dominating the news cycle that year.

Either way, many would-be property investors are likely to have missed this big change which could severely impact landlords who don’t read the fine print.

We’re going to break down exactly how difficult it has become to generate a real, long-term profit from a buy-to-let (BTL) and why it’s one of the most tax inefficient investments you could choose.

Seriously, the changes mean going from thousands of pounds in annual surplus income from a property investment, down to £0 or even into negative territory.

That sounds crazy. What exactly were the changes?

The big one was the removal of the ability to offset mortgage interest costs against your rental income. It used to be that any interest that a landlord paid on their BTL could be deducted from their rental income for tax purposes.

Let’s show you how this used to work.

He could offset the interest against his rental income of £2,000 per month, which reduced his tax bill.

Pablo has a salary of £95,000 which makes him a Higher Rate Tax Payer, which means he has to pay 40% tax on the surplus income. After offsetting the mortgage interest against the rental income, he would still have to pay a total tax amount of £2,400.

Over the next four years, the ability to offset this mortgage interest was removed. Now, landlords receive a tax relief of 20% against the mortgage interest, and that’s it. It doesn’t matter whether Pablo is a Higher Rate or Additional Rate taxpayer, he can only ever claim 20%.

Now instead of being able to fully offset the £18,000 interest against the £24,000 rental income, he only has £3,600 mortgage tax relief that can be taken into account. The figures now look like this:

This one tax change has wiped out Pablo's entire cash flow surplus. This example property is not only going to provide him with no extra cash each month. In fact, it’s even worse than that. Once we include costs such as agency fees, rental insurance or maintenance, it’s actually going to cost him money.

In the essences of fairness, it doesn’t include capital gains either, so let’s look at a fully worked example.

The total return from a buy to let property

Let’s say Pablo doesn’t mind chipping in extra each month, because he feels he can still win by receiving capital gains over the years. Let’s take a look at a full example of how these numbers stack up.

Property giant Savills are projecting UK real estate prices to increase by 13.1% between the end of 2021 until 2026, which equates to an annual capital growth rate of around 3.2%. 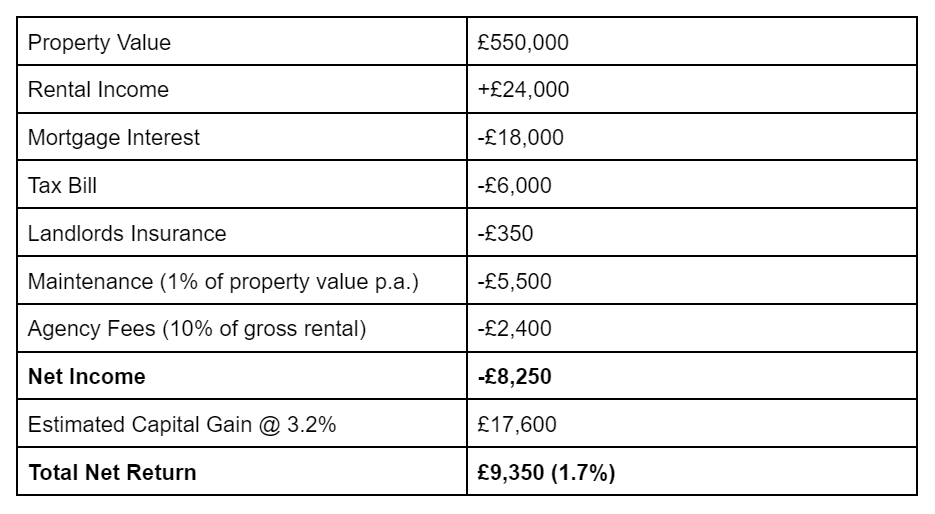 So even if Pablo is able to pour in an additional £8,250 of his own money every year to keep the property afloat, and he keeps his maintenance costs within the average limits and he has zero vacancy periods, his net return is still less than 2%.

Professional real estate investors will generally assume at least 4 weeks vacancy, which would worsen the figures above even further.

This is lower than the interest rate that you can get from a fixed deposit right now. After all the hard work, potentially hundreds of hours poured into the process of searching for a property, dealing with agents, lawyers, mortgage brokers, and tenants, how much would you price your time?

Even at the minimum wage of around £10/hour, that really adds up.

Assuming 200 hours as a one off investment for each transaction (when you buy or sell), and an ongoing 50 hours every year for managing the tenants and agents, you’re looking at another £2,000 in time cost upfront and an extra £500 every year.

The only benefit Pablo has is the ability to leverage, which means he is taking more risk with his money but increasing his potential returns in the process.

Let’s also not forget that if Pablo were to realise the capital gains, he’d pay more tax than he would on any other investment. For a Higher Rate Tax Payer, the rate of capital gains tax is 20%.

However, property comes with an 8% surcharge, taking that up to 28%.

For a gain of £100,000 on other investments such as a diversified stock portfolio, Pablo would pay £20,000 in tax and all of the ongoing management would be outsourced to a company like Rosecut.

Not to mention the fact that it would be simple to split the capital gain over 2 tax years, bringing the tax down even further.

On the property, he’d pay £28,000 capital gains tax on that same gain and have to do all the work himself.

A 1.7% return is far below what investors should be targeting.

Compare this outcome to the potential long-term return for one of Rosecut’s balanced portfolios of around 5.6%. The difference between a 1.7% return and a 5.6% return over the course of 10 or 30 years will blow you away, we are talking about hundreds of thousands here.

Don’t believe it? Check out our app and use our free financial projections tools to see what a difference it would make for your financial situation.

Please note that this is not a financial advice and it does not take into account individual circumstances. Please also contact a professional advisor prior to any decision making.

The value of an investment and the income from it can go down as well as up and investors may not get back the amount invested. This may be partly the result of exchange rate fluctuations in investments which have an exposure to foreign currencies. You should be aware that past performance is no guarantee of future performance.

Don't Buy a Home: Here's Why

Buying a home is often the largest purchase you will make in your lifetime. And a decision many of us rush into as part of growing up. But what if we told you getting onto the property ladder is not always the best option?
Asset Allocation
6 mins
Rosecut Technologies

Buying a family home is more of a liability for your personal finances rather than an investment as you will not see any of the benefits until you sell. We look at an alternative strategy to buying a property.
Your Action Plan
2 mins